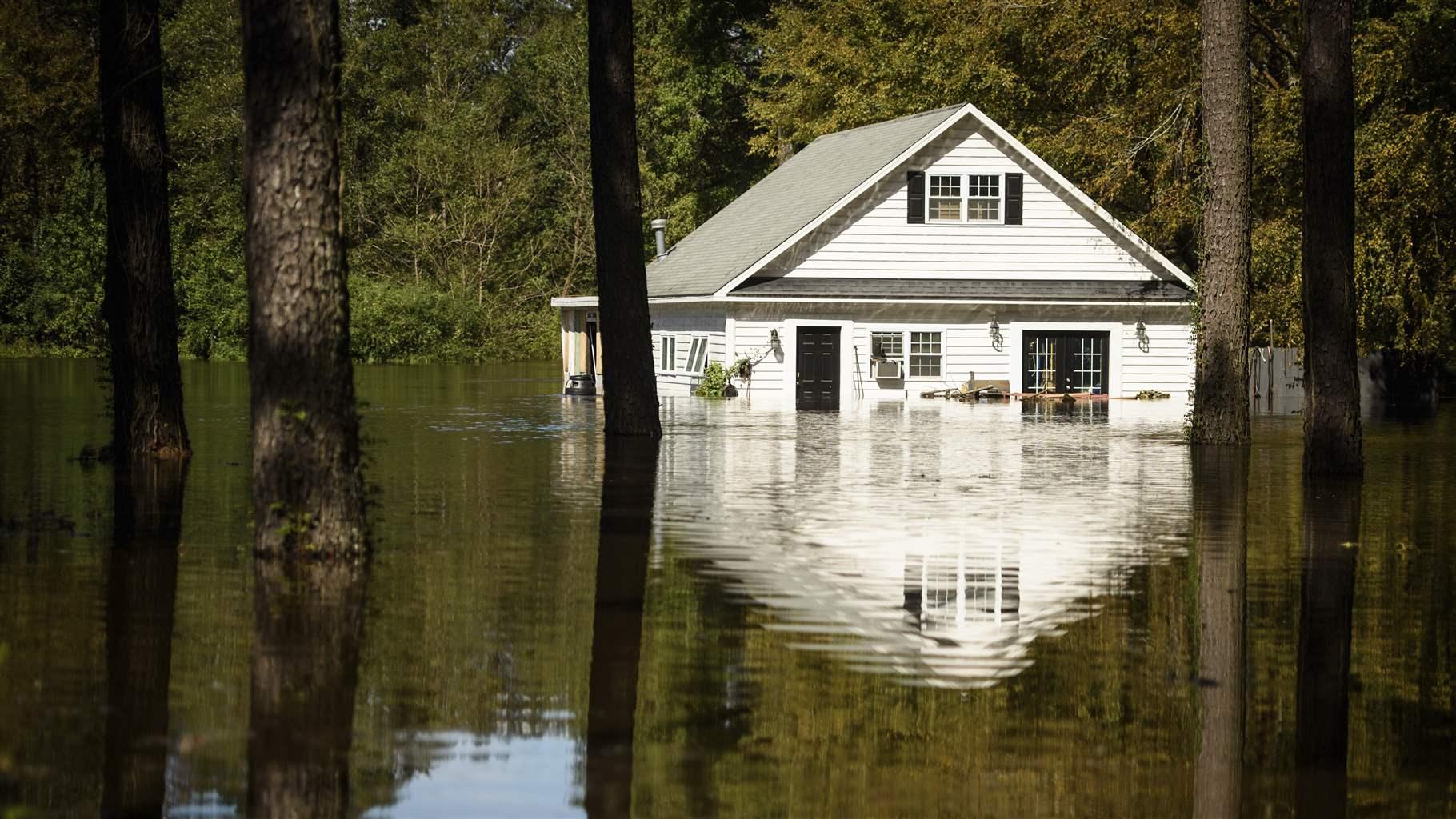 Flooding is a coast-to-coast threat in the United States and its territories in all months of the year. It is the most frequent and costly hazard with approximately 75% of all presidential disaster declarations resulting from natural events where flooding was the major component.In most years it causes more damage in the United States than any other severe weather-related event with an average of $5.3 billion spent a year from 1975 to 2004. During this same period, an annual average of 93 people a year lost their lives due to flooding.

Flooding typically occurs when prolonged rain falls over several days, when intense rain falls over a short period of time or when an ice or debris jam causes a river or stream to overflow onto the surrounding area.

The most common cause of flooding is rain and/or snowmelt that accumulates faster than soils can absorb it or rivers can carry it away. Flooding can also be caused by the failures of water control structures such as dams and levees.

The severity of flood events is typically determined by a combination of:

Flash floods can be caused by slow-moving thunderstorms and dam or levee failures. These types of events are rapid and usually occur within six hours of the immediate cause and result in a very rapid rise of water over low-lying areas. Steep, hilly, or mountainous terrain are at greater risk of flash flooding as are urban areas due to the large expanses of concrete and asphalt surface that do not allow for adequate water absorption.

Riverine flooding occurs when river levels rise and overflow their banks or the edges of their main channels. River flooding can be caused by heavy rainfall, dam failures, rapid snowmelt, and ice jams.

Coastal flooding is typically a result of storm surges, wind-driven waves, and heavy rainfall produced by hurricanes or other coastal storms.

Urban flooding results because urbanization increases the magnitude and frequency of floods by increasing impermeable surfaces, increasing the speed of drainage collection, reducing the carrying capacity of the land, and occasionally overwhelming sewer systems.

The National Flood Insurance Program has developed a mapping system to identify flood-prone areas in an effort to help communities understand their risk. Three main categories of risk areas are defined.

A high-risk area is a special flood hazard area (SFHA) where there is a 1 in 4 chance of flooding during a 30-year period. They are typically indicated on flood map zones with the letter A or V.

A moderate to low-risk area is a non-special flood hazard area (NSFA) where the risk of flooding may be low but cannot be completely removed. They will typically be identified on flood map zones with the letter B, C, or X (may or may not be shaded).

Undetermined risk areas are areas where no flood hazard analysis has been conducted but a flood risk may still exist. These areas will be labeled with the letter D on flood maps.

Periodic flooding of lands adjacent to non-tidal rivers or streams (areas known as a floodplain) is a natural and inevitable occurrence and can be expected to take place within regular recurrence intervals. The recurrence interval of a flood is defined as the average time, in years, expected between a flood event of a particular magnitude and an equal or larger flooding.


You should know that anywhere it rains, it can flood. Floods can even be in areas with a low risk of flooding. Just because you haven't had a flood in the past doesn't mean you won't in the future. Flood risk is based on a lot of factors including rainfall, landscape, flood-control measures, river-flow and tidal-surge data, flood history and changes due to new construction and development.

To prepare for a flood:


If a flood is likely in your area:

If you must leave:

Be aware that most insurance policies do not include flood damage. Think about buying a separate flood insurance policy. Go to www.ncfloodmaps.com to find out if you are in a flood zone. Or contact the Onslow County Floodplain Manager at:


Flood losses are not normally covered under renter and homeowner’s insurance policies. You can get separate flood insurance in most areas through insurance agents. Policies are available whether the building is in or out of a known flood-prone area. There is a 30-day waiting period before flood insurance can begin.

What you can do:

Want to learn more about Flooding and how to protect yourself and your home? Visit these sites:

Want to learn more about the National Flood Insurance Program and Floodplain protection measures? Check out these FEMA/NFIP brochures (Note: Some of these are LARGE documents best opened on a computer):

General Information on the NFIP

Recovery From A Flood